So to take a step back, the week of graduation I continued to knock off more tasks from The IU Bucket List including,

#6 Picnic along the Jordan River √

Okay so this might be one of the only tasks from the Bucket List that I didn’t technically do, but only because I did something better!

So instead of having a tame picnic where I would only get to enjoy the river as a bystander, I decided instead to really connect with the Jordan River via total immersion. So instead:

"Jumping" into the Showalter Fountain

This rafting came about on a very chilly night after having worked my last event at the Auditorium. It is tradition at the Aud that after the last season show, the entire front of house staff jumps into the Showalter Fountain. Unfortunately, Showalter Fountain was under renovations so there was no water to actually jump into.

My hiring class after the water balloon fight

So instead, the entire FOH staff partook in a massive water balloon fight. But for me and my dear friends Sammy and Logan, that wasn’t good enough. We wanted to take on the Mighty Jordan.

Okay, so technically the Mighty Jordan River is a medium size stream that runs through campus. But when it rains, it can get crazy! On this night though, the Mighty Jordan was… well… not so mighty. But we didn’t care.

We took our inner tube, jumped in the river, froze our butts off, and rafted. And when I say rafted, I mean that we pushed ourselves along the bottom of the creek bed while laying on a plastic inner tube. I think at one point each of us did float for a few second without having to use our own force. The sight of us was just ridiculous. 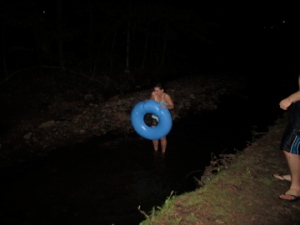 After a successful ride down the Mighty Jordan.

Soon the rest of the staff joined us for rafting and as far as I know, no one got pneumonia! Mission accomplished.